Where Were the Brownies?

I attended the presentation of the proposed Landy development 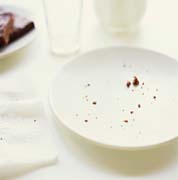 last Tuesday. And while there were no brownies or slick promotional pieces like at the Cafritz meetings, a fair bit of information was imparted to the community members.

New designs for the buildings took center stage at the meeting. Slated to house 1216 apartments, they will feature many large windows, bay windows, private balconies and rooftop areas complete with recreational facilities and trees. This will be a gated community with its own on-site parking and security. Also part of the plan is a parking garage with more than 2431 spaces.

Community concern focused on smart growth and environmental issues: storm water management during and after construction, traffic congestion and school overcrowding. In addition, questions were asked about light pollution, stream health, green spaces and vegetation. These topics were raised repeatedly by residents of Hyattsville, University Park and College Park.

I felt only the storm water management issues were adequately answered, with detailed information on buffer zones, drainage areas and a sediment pond. It sounded well thought out, but I am in no position to evaluate the soundness of their plans.

Traffic concerns were brushed aside with assurances that the location’s proximity to the Metro will minimize the traffic impact. When asked directly if the developer would consider a shuttle to and from the Metro, the response indicated that transportation of this sort is better left to municipalities. Concerns over offering two parking spaces per unit were dismissed as if this is not a negotiable point. The developer intends this to be a luxury project and that, apparently, requires two cars per unit.

To lessen the impact on schools, the developers indicated willingness to market part of the building with age restrictions of 55+ and no children under 18. However, this would be only a portion of the project and no firm number of 55+ units was disclosed.

Adequate traffic planning and school enrollment issues are county responsibilities. However, I found the Landy development group unwilling to address these important community concerns with anything beyond generic responses.–Michelle H.

2 responses to “Where Were the Brownies?”